One of the largest and most densely populated districts in Zagreb is called Trešnjevka. Due to its size, it is administratively divided into two parts: northern and southern. Once just outskirts, Trešnjevka is the site of many metamorphoses.  Right until the 70s, Trešnjevka was primarily a working class neighborhood, with small houses for poor families, but in the past 40 years this working class character has changed a bit, and Trešnjevka became a blend of opposing tendencies. The original, peasant-style houses with big yards are now crammed in with newer apartment buildings. Many people who come to live in Zagreb, especially students, begin their new lives in this very area. Well known parts that form Trešnjevka are the historical settlements and spaces that have identities of their own: Horvati, Jarun, Knežija, Ljubljanica, Prečko, Remiza, Rudeš, Srednjaci, Staglišće, Old Trešnjevka, Voltino and Vrbani.

The most nostalgic area definitely is „Old Trešnjevka“, where one can feel the pulse of bygone times. In 1891 the first tram line with storage for trams was built. Today at that site stands Techical Museum Nikola Tesla established in 1954, having several thousand items on permanent display among which are objects of everyday use typical of the industrial era of the 19th and 20th centuries.  Many other factories which would close down over the years or change business, were also built there, but one of them stands proudly since 1921 – world famous Končar. In the heart of Old Trešnjevka is the first center in Croatia that has entered the European Network of Cultural Centers: Trešnjevka Cultural Centre. This public sociocultural institution delivers programs aimed at education in arts and culture, as well as ones enhancing creative potentials, artistic expression and lifelong learning. In the very vicinity you can see the 35 meter high bell tower of St. Joseph’s church built in 1937. Two other magnificent churches found their place here – The Church of Mary the Helper in Knežija and the votive church Holy Mother of Liberty in Jarun. Trešnjevka may not be a district known for its art, but it is their discovery in sometimes unexpected places, what gives Trešnjevka a real charm, like many galleries, libraries and statues of famous Croatian people. Visit Modulor Gallery, and make sure to take the young ones to Trešnja Theatre, an inevitable station on the path of growing up of every child from Zagreb and wider.

They say Trešnjevka is one of the “most sporty” neighborhoods in Zagreb, which is due to the large number of sports facilities and the location of Lake Jarun. There are sports fields for athletes and recreants, rowing clubs, kayak and canoes clubs, surfing and sailing clubs and – fishermen. One can skate there, play volleyball and wonder around sculpture park. It is less known that Trešnjevka is one of the city’s leading districts when it comes to bowling and home to 7 bowling clubs.  For many years, NK Zagreb is the second strongest and most famous Zagreb football club (after NK Dinamo) and by far the most famous football club in Trešnjevka. NK Zagreb’s matches are being held at the stadium in Kranjčevićeva street which is often a venue for concerts of famous bands. Dom sportova is a complex of sports halls which are being used for ice-skating, hockey, basketball matches, indoor football matches, concerts, etc. Here is also Dražen Petrović Basketball Hall – an indoor sporting arena which serves as the home court for the professional basketball club KK Cibona, along with Dražen Petrović Memorial Center. Although greenery is not the first thing to link Trešnjevka with, there still remains a fair amount of green space and cherry trees after which Trešnjevka got its name. With its friendly and peaceful atmosphere, the neighborhood inspired many poets through time to associate Trešnjevka with love, pleasure, relaxation, serene verse and lyrics.

There are two faculties situated in Trešnjevka – Faculty of Kinesiology and Zagreb University of applied sciences, as well as two student campuses named after Stjepan Radić and Ante Starčević. One of the most important public spaces and a central place is certainly the Trešnjevka market, that opened back in 1930., although in a smaller capacity than it has today. This is a bustling place filled with small booths with homemade and homegrown goods, cobblers, key-makers and variety of inexpensive clothes for sale. Here you can find industrial architecture, the Old Trešnjevka square and bowling grounds, although some of them are overgrown with grass. For shopping lovers, the district offers a number of second hand shops which run through Tratinska Street across Ozaljska Street until Ljubljanica. It is also famous for all things vintage such as LPs and vinyl’s, in places like the Free Bird Music Shop. Sprinkled with little boutiques and family-owned shops, Trešnjevka is vibrant and easygoing. For a good cup of coffee or a delicious piece of cake you should visit Jiggy bar, Tesla Smart bar, the cake shop Magnolia, Choco café and one of the oldest, Meli. Be sure to visit Pizzeria Purger, which was among the first in the 1980s to have opened its doors and is still working. If you are into local atmosphere and food, the restaurants Stari kotač and Kod dede in Prečko are indispensable. Meat lovers and those who crave more hearty food should definitely find time to visit delicious house of ribs, R&B Food. For a good night out try going to Vintage Industrial bar on Savska road, or to one of many night bars and clubs spread round Jarun lake. 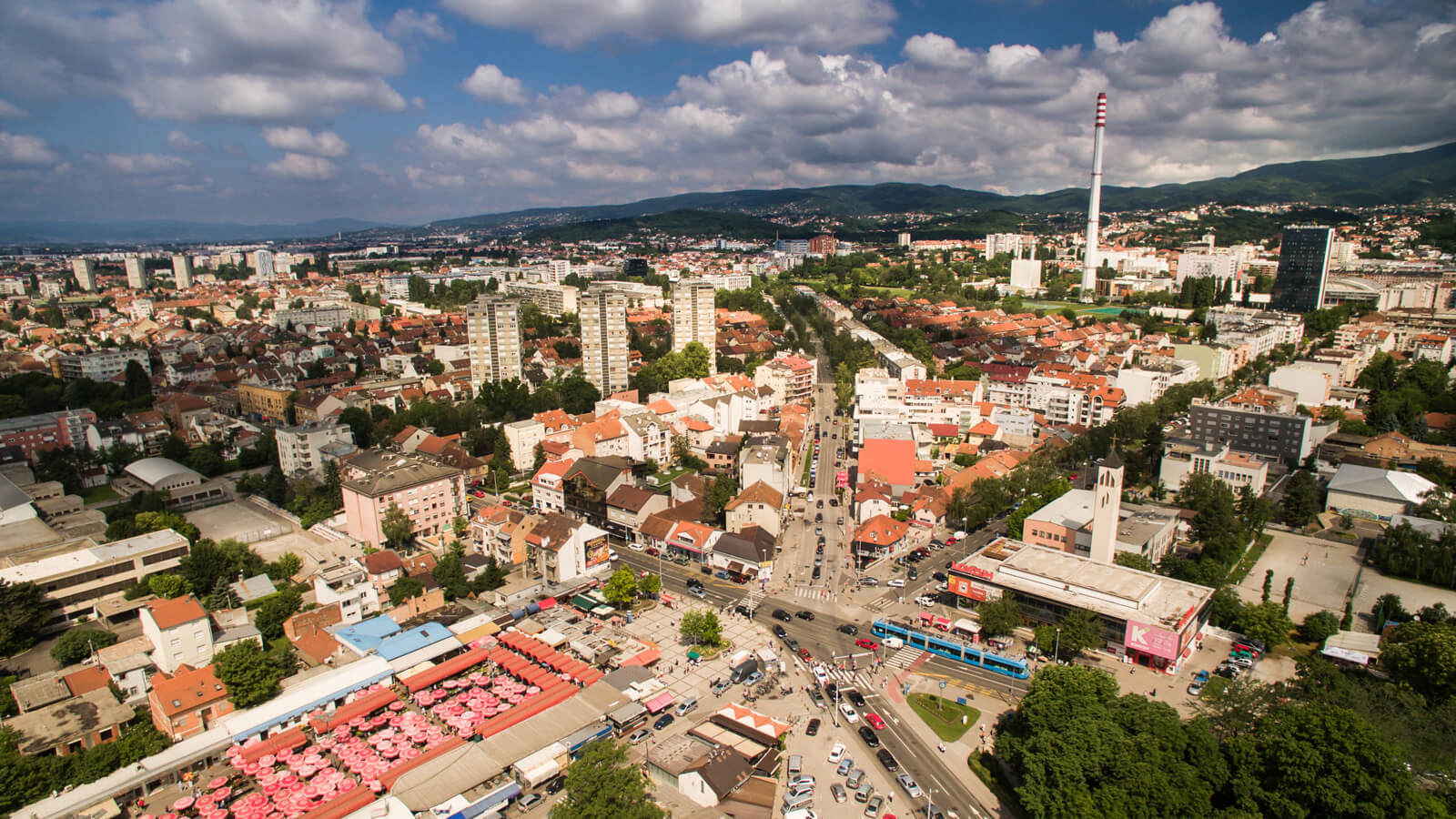 Properties to rent in Trešnjevka

Excellent street shop of 88m2 with a large window on a frequent location in the very ce...

Modern apt. in a new building close to the International school "Matija Gubec". It is c...

Lovely 3 bed penthouse in a nice and well maintained building with an elevator in centr...

Properties for sale in Trešnjevka

Excellent street shop of 88m2 with a large window on a frequent location in the very ce...

Excellent one bedroom apartment on the 1st floor of a nice neat building on a fantastic...

Detached family house in a quiet, cul-de-sac street near Lake Jarun. The house was ren...